Follow-up Conference
To support the people who came to faith in Christ during the summer conference or renewed their faith, every year in September a follow-up conference takes place. About 80 till 100 visitors of the Summer conference, who committed themselves to Christ are visiting this conference. Amongst time to socialize and get-together again with the others who had visited the Summer conference, also a good reason to return, there will be conversations about how they managed in the past weeks and they will be ‘discipled’ in their (new) faith. 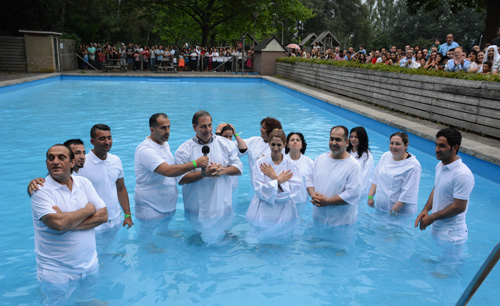 Other conferences
For those who are followers of Christ for a longer period, building up is still needed. That is why there are during the year several Bible study conferences.

In 6 cities in the Netherlands are communities of Arabic speaking Christians who once, sometimes twice a month come together. In for example an auditorium of a school, they will have an Arabic church service. The other Sundays they will visit the local Dutch church they belong to, or watch the Arabic services on television. So those are not Christian communities, like ‘ours’, but very worthy for these group of Christians.